Exactly 10 days [ April 5th] after the first laughing gull sighting [ prior prediction was 10-14 days ] we are thick into big burly blues that just swam into town looking for fight!!

This Week some anglers aboard the Reel Fantasea scored this years first Barnegat Bay Slam which include any 3 of the above species in one trip! With one skillful angler scoring 2 slams in one trip!!

Not only have more big weakfish showed up this week but big gator blues have added even more rod bending , drag burning excitement to the already robust light tackle schoolie striper action!!

If you haven’t experienced the visual excitement of big slammers on light tackle while employing light tackle surface poppers the time is now!! This fish get right to business crushing and attacking anything that looks like prey!

I do have a couple of “Spring Break Specials” available this week [ 5pm- 8pm] which aligns  up perfectly with the tide this week for any body looking to jump aboard the Reel Fantasea for rod bending , drag burning , visual excitement. 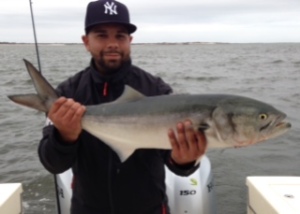 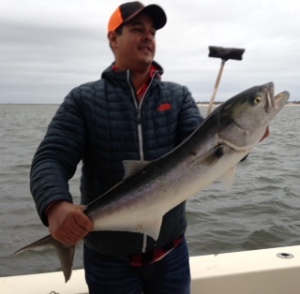 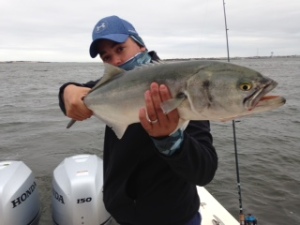 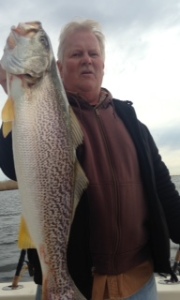 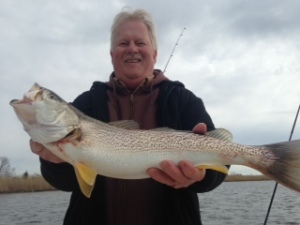 Captain Steve has been fishing our local waters since the age of nine when he purchased his first boat, that was back in 1974. Since then a "few" years have past and his passion for fishing has grown even more ! From Barnegat Bay, inlet and it's offshore waters of Long beach Island N.J. Captain Steve has spent more time on the water than most other captains perfecting and honing his salty skills to provide the most fish catching enjoyment and knowledge to both novice and veteran anglers alike. Captain Steve has grown up fishing these local waters. His knowledge of fishing has been sought by magazines, papers, fishing clubs, boat shows and is also a veteran faculty member of George Poveromo's "National Seminar Series" as well as being Featured on NBC sports George Poveromo's "World Of Salt Water Fishing" . If a fish catching outing is what your looking for than look no further ! Your enjoyment and safety will always be the our focus for a memorable experience! View all posts by Reel-Fantasea-Fishing

Fishing Reports From Years Past

Want to share your recent fishing report to help other anglers?

As well as many frozen baits!